Miranda Kerr, an Australian model, and businesswoman is the first-ever Australian Victoria’s Secret Angel model, having a perfect tone curve, sunkissed tan skin, and perfect legs. She’s always hailed as one of the all-time favorites among the angels.

She is consistently listed as the highest-earning model of Forbes. Continually recognized as one of the most beautiful women and even represented “David Jones” — an Australian department store.

She would not be MIRANDA KERR for anything, so let’s take a look at her secret for always looking so stunning throughout the years. Let’s dive in and find out how models live their life.

Who is Miranda Kerr?

Who else doesn’t recognize this Australian beauty? But, hey, it’s better to start understanding where she came from and how she became such a very well-known model.

Born in Sydney, Australia, Miranda Kerr is a 37 yr-old famous supermodel and a daughter of Therese Kerr and John Kerr. She was raised in the Australian countryside, wherein no one cares what you wear and style.

Both her parents decided to move to Brisbane, Queensland so that Miranda and her younger brother would be able to experience what city life is. She was reluctant at first, leaving her hometown, but after the death of her first boyfriend, she then decided to leave her childhood place.

Then, at the age of 13, she started her modeling career with Chaay’s Modeling Agency. She immediately rose to popularity in 2007 as one of “Victoria’s Secret” Angels. She then received different modeling work, and offers are left and right-handed to her.

But before she had officially become an Angel of Victoria’s Secret, she was already chosen as successor of Alessandra Ambrosio — the face of PINK in 2006.

Since then, her career has boomed and became one of the most in-demand and famous supermodels. She even launched her skincare brand and had named it “Kora Organics.” Despite being a mother to three, her beauty and the perfect figure didn’t fade away.

It’s all the result of her everyday workout, strong self-discipline, and strictly following her regimen. 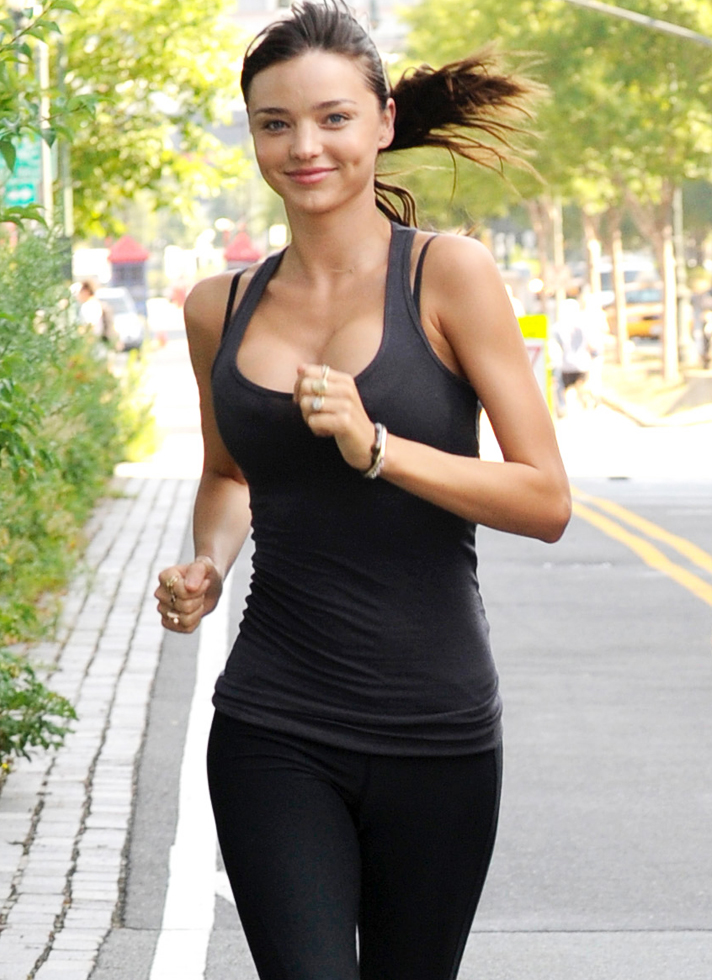 Much like most models today, Miranda always works out and makes sure that she strictly follows her regimen and does it every day. But compared to other models and celebrities, she switches her exercises up a bit depending upon the day.

In one interview she had with Elle US, Miranda expressed that she likes to exercise in the mornings. So that she’s sure of completing it.

She also said that a half-hour of the exercise is committed to hatha or kundalini yoga, which she has continuously been practicing throughout the previous 15 years.

For a traveling model, having yoga as an exercise seems ideal as you can do it any place, any time. On the other hand, she also does a bit of running, pilates, lifting weights, or doing resistance band exercises.

If you’re aspiring to become and achieve Kerr’s body, it is recommended that you mix up all of her exercises as she does. The combination of every one of her exercises encourages her to remain mentally and physically fit.

In each set, she’s performed it three times.

You can perform a total of 2 rounds.

Miranda does a yoga session of around 30 minutes and afterward does some lifting for about a similar measure of time. She incorporates a few squats, hip pushes, and lat pulldowns and you are all set. Keep reps over ten and do as much as you want.

Miranda starts with a yoga standard and afterward go into specific pilates movements. This is a great exercise to do at home as you simply need to have a yoga tangle and a pilates ball, and you are good to go!

She repeats the Wednesday routine. Sometimes, she goes for a quick run.

Miranda rehashes Monday’s exercise or chooses to do any other activities. She adds either a squat or deadlift variety as they give the most gains for the gym’s time.

She does some yoga work, and afterwards, goes into the resistance bands.

When it comes to mental health, Miranda has and will always have a holistic view of it. She doesn’t just focus on preparing and training her body. But she also puts time into training her mind with a regular meditation session to keep a stress-free, clear, and peaceful mind.

Like most models, the ultimate part of keeping one’s figure is the eating regimen, yet Miranda doesn’t merely eat to look great. She eats to feel better and be healthy. I have listed below what she eats and believes is significant for each meal of the day.

Miranda follows the blood type diet (likewise called Eat Right 4 You). This eating routine concept was made by Dr. Peter D’Adamo, who had thought and believed that eating as indicated by the type of blood group can bring help to a person to digest well.

This type of diet is doing wonders for Miranda. But it might not have a similar effect on different people. She is carefully following this eating regimen. She belongs to a blood type A who eats vegetables and fish fresh, seawater, and a little organic-rich chicken. As Miranda said,

Here is how Miranda eats every meal:

Based on the Australian Vogue article, she says that she begins with some lemon and heated water or some green juice and afterward some toast, avocado, or bubbled eggs every day. If ever that she picks toast, she ensures that it is gluten-free. The green juice she has in the mornings is made of celery, kale, spinach, and cucumber.

The nutrient C gives her additional energy and awakens her digestive system for the rest of the day.

For the rest of her morning meal, she prefers making smoothies. Also, her #1 smoothie is both simple and extraordinarily wealthy in nutrients.

She begins with some almond milk and adds fresh papaya, spinach, raspberries, blueberries, and almond margarine for protein. She likewise tosses in the Kora Organics Noni Glow Skinfood supplement powder formed to help her keep her skin putting its best self forward.

Then, when she wants to have a treat, she prefers to make mini pancakes made freshly from bananas, a half-cup of oatmeal, and two free-range eggs.

When Body and Soul interviewed her, Miranda said she prefers to keep lunch pretty simple and regularly goes for a serving of salad with some grilled chicken and green veggies.

She also cooks a salmon filet and a side salad. The salad consists of fresh seasonal sprouts, chopped arugula, cucumber, purple cauliflower, and a large portion of an avocado.

Then, Miranda makes her own dressing, a mix of extra virgin olive oil, apple juice vinegar, and fresh lemon. She tries to drink a lot of water with her lunch and, if ever that she needs an additional boost, she will add a squeeze of lemon juice to the water.

In a similar interview with Body and Soul, Miranda illustrated what a typical dinner she prepares. It frequently includes turmeric with quinoa salad (spinach and walnuts) and chicken cooked in coconut oil.

Miranda loves making what must be named healthy solace food. Her number one recipe is slow-roast chicken. She begins with an entire chicken and adds onion, garlic, rosemary, turmeric, and… you got it… fresh lemon juice!

She then roasted the chicken at a low temperature for 7 hours. In the last one hour, she is now preparing for mashed sweet potato.

Miranda tries to avoid eating with sugar content. Instead, she tries to bring a healthy snack with her. She loves having almond nuts, apples, goji berries, and blueberries as her snack. To stay hydrated every day, she tries to drink about three liters of alkaline water and usually brings a water bottle with her.

Considering how perfect Miranda’s figure is, you would have thought how intense her workout routine and strict diet plan were.

But it’s all quite straightforward actually, and she just keeps focusing on staying lean, eating clean, and with all the things that make her feel better. And if ever she feels like it’s something doesn’t, she simply takes her time changing it. If you want to be like her, living a simple routine and focusing on your target goal like she did, is probably the simplest way to get there.