Courtney Dauwalter is a former high school science teacher and an ultramarathon runner known for her speed and love of exploring her limits in the ultra running competition. She has been called several things from best ultrarunner to a superhuman athlete.

With her accomplishments, there is no doubt why her name is one of the hottest and prominent in the field of ultrarunning right now. However, she wasn’t able to accomplish this overnight. It was the overall result of her strong discipline, solid dedication, and a great mindset.

Becoming like her requires you to be as focused and dedicated as she is. If you aspire to become a superhuman athlete, let’s find out how Courtney Dauwalter does it all.

Who is Courtney Dauwalter?

Dauwalter was born on February 13, 1985, and was raised in Hopkins, Minnesota. Way back in her high school days, she had already competed in several sports like nordic skiing, track, and cross-country. She even bagged a four-time Minnesota state champion in playing nordic skiing.

In 2016, she won the Run Rabbit Run 100-mile race, in which she finished the competition in first place (a total of 75 minutes ahead of second-place). Likewise, she set a new record at the Javelina Jundred 100K. I would like to highlight how this is an incredible feat as she was considered a beginner and amateur runner during this time.

In 2017, before Dauwalter became a full-time professional run, she was initially working as a middle and science high-school teacher in the Denver area. The same year, she won another year of Run Rabbit Run, even if she battled temporary blindness when running the entire final of 12 miles.

In the 2017 edition of the Moab 240 race in 2 days, 9 hours, and 59 minutes, she also won and took first place (beating the second-place by more than 10 hours). Utterly incredible.

In the following year, she once again won a 100-mile race (Western States Endurance Run, wherein Dauwalter finished the game with a total time of 17 hours and 27 minutes. She was recognized here as the second-fastest time accomplished by a woman in the race.

It was followed by a second overall champion in the Big’s Backyard Ultra 2018, wherein she set a women’s course record at a total of 279.268 miles.

Moreover, she also took second place in the Tahoe 200, having a new set of women’s course record beating the previous ultrarunner for over 18 hours. The Ultrarunning Magazine even awarded her as the Ultra Runner of the Year of 2018 after winning 9 races, including the two where Dauwalter took first place.

In 2019, she once again won in the Ultra-Trail du Mont-Blanc, with a total time of 24 hours, 34 minutes, and 26 seconds. Likewise, Dauwalter completed the 2019 edition of Western States but then decided to drop after 77 miles.

She finished the 12 spots competing in the United States at the IAU 24 Hour World Championship held in Brive-la-Gaillarde, France. Then, she won the American section of Big’s Backyard Ultra in 2020, setting the longest distance accomplished by a female runner in the entire race history.

She received the George Mallory Award as well in the year 2020; this was awarded to her for pushing her boundaries in human physical achievement. 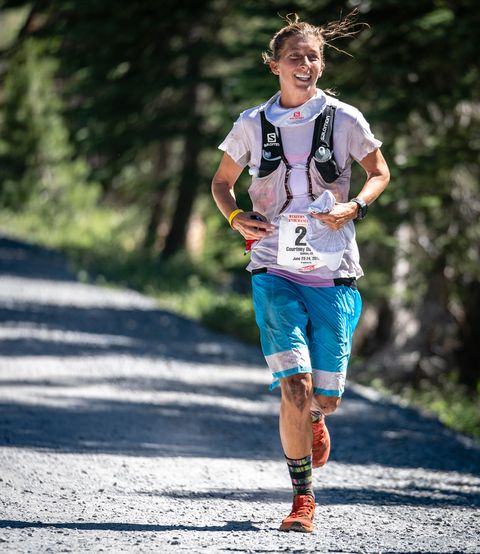 Dauwalter prefers to do most of her training alone since she is always out running while others are at the office busy working.

She shared that she’s happy to decide to retire from her teaching job and pursue her ultrarunning dream. But during weekends, she runs together with her husband or friends.

Gaining a huge success and great reputation as a man beater (as in someone who wins against men) in the racing scene, she has a deep understanding of how she can use her mind working on highs and lows, especially enduring and surviving the pain of ultra running.

Dauwalter shared that she is using a Suunto 9 to track all of her runs, which is her go-to brand. If she feels tired during the week, she can easily check and analyze her workouts and what’s going on.

For instance, she found out the reason why she’s been very exhausted because of how climbing she had packed in the last five days. Talk about endurance.

Moreover, it also reminded her when was the last time she had taken a rest. For her, it is such a great way to look back at what she has gone through and figure out what things she needs some improvements or adjustments.

“What I keep discovering during these ultras is how powerful our brains can be,” the best ultrarunner says. She uses that strength whenever she’s performing physical activity, tapping it to her head and then using it to overcome any physical discomfort she’s dealing with.

When you’re on an ultramarathon, it is inevitable not to think a lot of things. The danger here is that you will get in a thinking feedback loop. That’s why the superhuman athlete always ensures to stay in the present moment.

“Sometimes it’s about focusing on what I’m doing, how my body is feeling or just staying in the moment by breathing, taking another step, and breathing,” Courtney Dauwalter says.

Dauwalter is a huge advocate of being optimistic all the time, no matter what the situation is.
It is very vital not to let yourself drown with so much panic about how terrible it is. But instead, flip the script inside your head, tell and convince yourself that you’re feeling okay even if you are not.

Sometimes, no matter how you try to stay positive, every ultra will definitely bring you to a point where you think everything seems so sucks. Dauwalter says it is important to also acknowledge what you really feel.

“Sometimes, you just need to wallow for a second. “If the negativity keeps knocking, I’ll acknowledge how awful I’m feeling and how much it stinks to be puking in the bushes for hours, and acknowledging it lets me move past it to the next thing,” Courtney Dauwalter says.

It is important to have your own mantra that you can use to uplift yourself whenever you feel things are getting tougher. This will really help in flipping the script.

“I’m fine” and “everything is fine.” Try to keep it short and inspiring to you. “Put that track on repeat!” Courtney Dauwalter says.

One tactic that Dauwalter has proven to be worth and effective is reminding herself of the fact and evidence that she has already proven that she’s capable of enduring and surviving previous hardships already.

“I’ll remember back to when I’ve been in the same boat and got through it; remembering the evidence that this is something you have been through before helps you to keep pushing and know it will be fine,” Courtney Dauwalter says.

There are times that Dauwalter takes a different tactic. Rather than letting herself experience an ultra, for instance, reversing her negative thoughts into a positive one, instead, she permits herself to check out.

“Sometimes I try to totally disconnect from the race and think about my family and friends, different things going on in life, or about sitting on a beach with a tray of nachos. It varies from being fully present and giving all my attention to the running motion and to getting out of it and just daydreaming for some miles,” Courtney Dauwalter says.

The prominent Courtney Dauwalter, an ultramarathon runner, has a great record in all of her accomplishments the entire year of being in the race. She even already earned career-defining wins at Tahoe 200 and the Western States 100.

But how she was able to survive and arrived at the finished lines seems a bit unusual.

As she said, “There’s nothing strict about my diet at all. I eat without restrictions on any food groups. I don’t follow a training plan either. Both of these things mean I’m free to listen to my body every day and go from there. What I’m craving, how my legs and mind are feeling are taken into account each morning as I plan my runs and food for the day.”

Dauwalter shared that she usually sticks with a few cups of coffee during her pre-race, plus creamer. Sometimes, she eats early in the race but prefers to have a cup of coffee first.

Here are Courtney Dauwalter’s GO-TO FOODS during the race. She shared that these foods consistently work for her.

Here are Courtney Dauwalter’s GO-TO FOODS after a race

Here is the food that Courtney Dauwalter called a “normal person’s diet.” She doesn’t know if it’s a usual meal, but she finds it delicious.

“Not putting limitations on [my diet] makes life more enjoyable; it keeps my body happy.”

After long runs and races, Dauwalter shared that she immediately uses a Tailwind Rebuild (chocolate, on ice) for fast muscle recovery. It is also an easy way of getting some vital nutrients back into her system.

She shared that after her most recent race (the last-man-standing Bigs Backyard Ultra), she then drank a beer and just listened to her body’s craving. She said, “Why? Our bodies can tell us what they need if we pay attention to what we are craving. And beer is a delicious way to celebrate a long day on the trails.”

I know becoming a superathlete like Courtney Dauwalter will never be easy, despite knowing how simple her workout routine and how free her everyday diet is.

As long as you have the drive and focus to do what you want to accomplish, then everything will be placed according to what you aim. As Courtney Dauwalter wants you to always remember, “Keep searching for what is possible.”

Check out our 17 tips on becoming a better runner if you’re interested in the sport, and if you’re after more motivation from another Ultra Runner, check out this crazy man: David Goggins.