5 Quick Tips On How To Avoid Shin Splints When Running

Running is, in my opinion, one of the most freeing exercises you can do. It’s simple and requires no equipment; all you need are your running shoes and your workout clothes, and you’re good to go.

However, because running seems so simple and easy to do, it is also very easy to do incorrectly. Having the incorrect form or doing too much in so little time, among other things, can cause injuries.

You’ve probably heard a lot of injury horror stories, such as the infamous ACL injuries that affect mostly basketball players and keep them off the court for far too long.

Although these alarming injuries are something to look out for, you must also pay attention to the little pains and discomfort that you feel before it gets worse.

These are usually signs that you’re doing something wrong. Shin splints are one of those small but telling injuries.

Shin splints are described by the pain in the front and on the inside of the lower leg near the shin bone called tibia, between your knee and ankle. This is an overuse injury, meaning it is caused mainly by the high impact done during certain exercises. Running is especially susceptible to this because of the impact every step has on your legs.

Aside from the high impact of your foot hitting the ground as you run, there are several other causes of shin splints.

High-impact activities are the main factor that causes shin splints. Some examples of this, aside from running, would be jumping, sports with a lot of movement and jumping, and dancing.

Doing these high-impact activities without gradually building up your lower leg strength might cause shin splints. For example, beginners tend to go all out on the first few sessions of running in order to increase their mileage.

This isn’t a good idea for beginners as their muscles are not developed enough to take in the shock of each step. They might also have improper form, causing more and more damage to their lower legs and feet.

Walking all your life makes it seem like it’s second nature to us. However, your foot posture actually dictates how susceptible you are to injuries. This is why we should pay more attention to how we take each step.

Every time you step on the ground, your foot tries to adjust and rolls to meet the ground. This is called pronation. Your pronation affects how well you perform and how often you get injured.

A great way to check your foot posture is to check the wear of the soles of your shoes and your foot arch, which we’ll talk about below. To check the arch of your foot, wet your foot and place it on a piece of paper. Compare the shape to the diagram below: 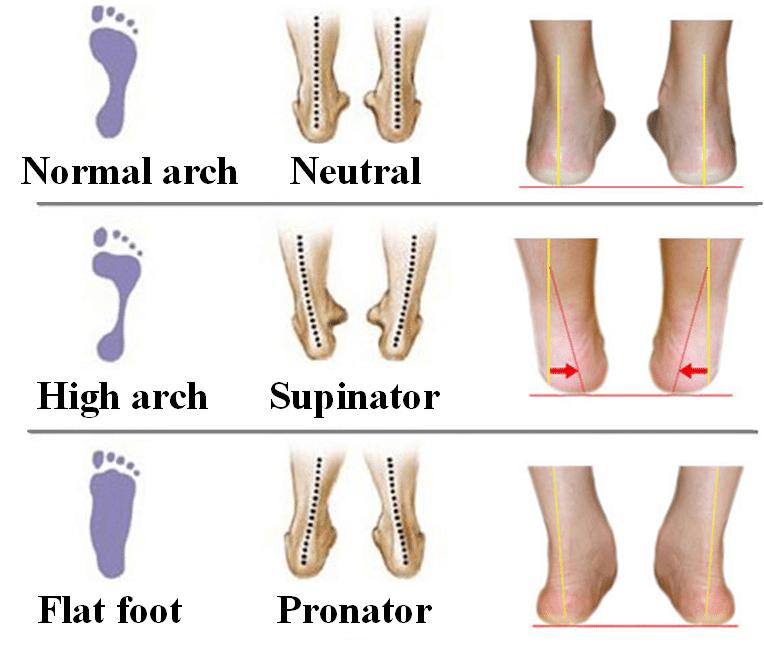 You can take a video of yourself from the back of a treadmill. You can also go to a shoe store and look for an expert who may determine your pronation type.

Shin splints aren’t something runners just have to live with. Fortunately, there are several ways to prevent them!

If you’re like me, you probably usually skip the stretching before and after running. This is a really bad habit!

I can’t tell you how many times I woke up with the DOMS (delayed-onset muscle soreness) that could have been prevented if I had taken 5 minutes to stretch.

Make it a habit to stretch before and after running. Treat is as somewhat of a warm-up and cool-down for your muscles. Just like how you have to get your heart rate up a bit first before going all in, you also have to warm-up your muscles.

Some stretches you can include in your routine would be:

Sudden increases in mileage can cause sudden impacts on your legs too. If you’re a beginner, you must first get used to the feeling of running. Even if you will yourself to go greater lengths, your body is just not there yet!

You might want to run around 1-3 miles for 2-3 days each week. Do this consistently, and your legs will naturally grow stronger to adapt to your workout routine.

If you’ve been running for a while, you might want to follow the 10 percent rule, which claims that you must only increase your mileage each week by 10 percent. So, if you ran a total of 10 miles this week, do 11 miles next week.

Of course, the best way to stay safe is to listen to your own body. You’ll know if you’re doing too much.

Running on hard surfaces increases the impact that your legs would feel.

Consider running on dirt trails and grass to assist your legs.

Your shoes are an important part of your running journey! You might want to consider getting a new pair of shoes if you’ve run in them for 300 miles or more.

You also want to get shoes that would support your foot posture. If you have normal pronation, you’re lucky as you can use any general (neutral) running shoe. However, someone with overpronation might need motion control or stability shoe. Luckily, most brands have that type of running shoe for you.

On the other hand, those who have supination might want to find a neutral running shoe with extra cushioning.

Running is a great way to strengthen your lower legs, but it’s also high-impact with a high risk of injury. Consider incorporating strength training into your routine. You can start with the following strength exercises, as suggested by Map My Run by Under Armour.

Stand on your tiptoes and walk forward for around 15 meters. Do this twice.

Fortunately, shin splints aren’t that complicated to prevent. Although long-time runners have probably had them once or twice on their running journey, that doesn’t mean you have to live with it. With the proper practices and forms, you can find yourself having healthier and safer runs.

If you’re already feeling some kind of a pain in your shins, though, consider doing the RICE method (rest, ice, compression, elevation). Take a rest day and place ice packs on your shins for 15 to 20 minutes. Make sure the ice isn’t directly on your skin.

You can use a compression sleeve to reduce the inflammation. While icing, you can also elevate your shins. Feel free to check out my older post on some tips for becoming a better runner.

The most important thing is to always listen to your body. If, while running, you feel some pains, stop for a while, and consider taking a recovery day. Your progress won’t completely go out of the window! In fact, taking rest days will make your training more sustainable. Go on your fitness journey safely!