“In my pursuit to understand and learn from the greatest competitors in the world, David Goggins is one of those few people that set very high standards.” – Pete Carroll, Head Coach of the Seattle Seahawks

To get such approval and accolade from one of the most respected coaches in the NFL; somebody who’s around some of the best athletes in the world every single day, speaks volumes of who David Goggins actually is.

Imagine somebody who transformed himself from a depressed and overweight young man with no prospects in the U.S. Armed Forces to one of the best and most revered athletes in the world! Well, that’s David Goggins for you.

In all honesty, defining a man such as David Goggins is very difficult. Well, this is because he’s a man of many hats that you even wonder where to begin. This is someone who has become synonymous with pushing yourself beyond your physical limits and keeping at it.

I’ve even had the grace of meeting this man at an event in my local area a few years back.

So, Who is David Goggins?

While most of you already know who David Goggins is, this article wouldn’t make much sense if we do not delve just a little bit into who this great man is. Known as an author, motivational speaker, and retired U.S. Navy SEAL, David Goggins is, at its core, an ultramarathon runner, ultra-distance cyclist, and a triathlete.

Born in Buffalo, New York on February 17, 1975, David Goggins is widely known for his near-superhuman athleticism. Despite having asthma and heart defects, he’s the only person to have completed Navy SEAL training, Army Ranger School, and Air Force Tactical Control Training.

And that’s not all; David Goggins served in Iraq and Afghanistan during his days in the army. He’s also known as “The Toughest Man Alive,” perhaps because he’s broken countless athletic records and has been through two Hell Weeks during his Navy SEAL training. This is, without a doubt, no mean feat even by the Navy SEAL standards.

David Goggins has also written a book, “Can’t Hurt Me, Master Your Mind and Defy the Odds.” He shares his amazing journey and inspirational story with the hope that it will inspire others to stay strong not just physically but also mentally.

You can also gain some incredible insights into Goggins’ life and workout routine by reading another excellent book; “Living with a SEAL: 31 Days Training with the Toughest Man on the Planet” by Jesse Itzler.

From his impressive military achievements to being a one-time World Record Holder in the Guinness Book of Records for the most pull-ups done in 24 hours, Goggins has been dominant in various fields.

While his achievements in various 100-mile races are enviable, his physical transformation and mental toughness are second to none if not legendary. We’re speaking of a man who went from being depressed and overweight as a young man to one of the top athletes in the world while breaking records along the way. 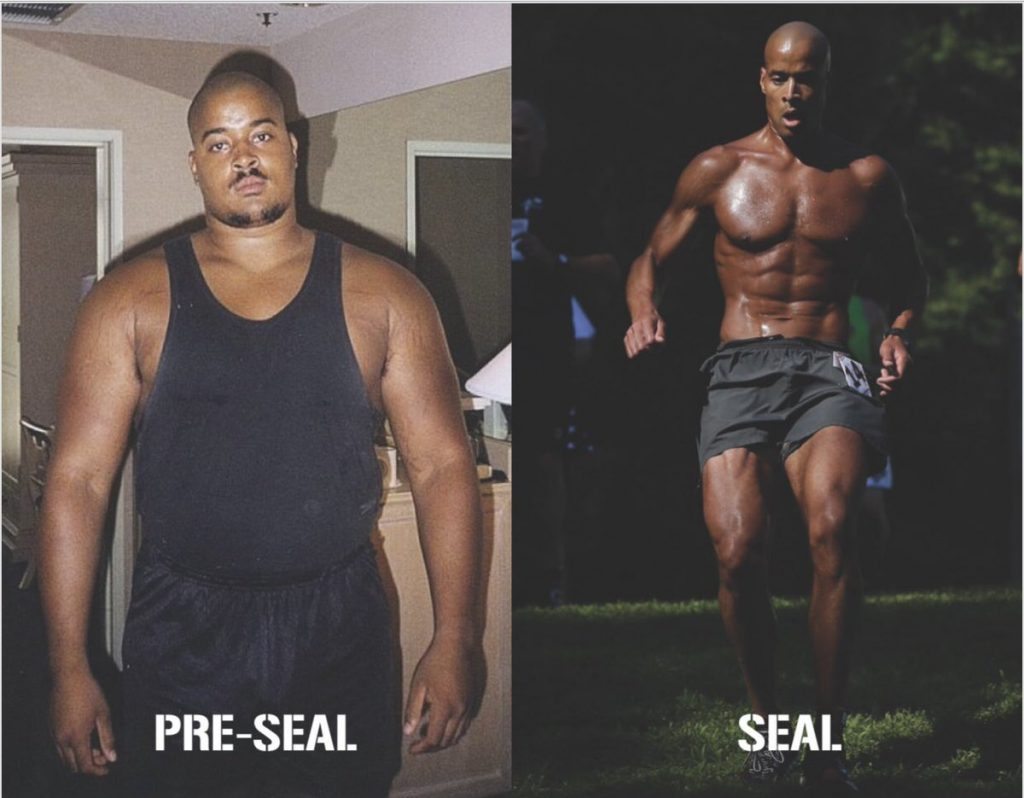 Of course, we can write a whole book about David Goggins’ feats and achievements. But what would be the essence of it if we do not give you an insight into his amazing workout routine?

In addition to being featured in several motivational videos on YouTube, Goggins is known to run in 100-mile marathons and is widely known for having lost a whopping 106 lbs. in 3 months! But how did he do it? Well, Goggins swears by his “Go Hard or Go Home” work ethic, which is in all honesty, a pretty strict workout regime.

In his own words, he doesn’t love running, biking, or swimming, but he still performs these activities every day to achieve his dreams and remain at the top of his game.

Although Goggins has gone into details on his daily workout routine, he has workout principles that has helped him achieve his near-superhuman body and achievements. Let’s look at these principles.

Like many top athletes and successful people, Goggins wakes up early (at around 3 or 4 in the morning). He starts his workout routine by going for a 10-15-mile run. He then takes a quick shower before jumping on his bike to cycle for 25 miles to his workplace.

This, of course, means that he’ll have to cycle another 25 miles back home at the end of the day, so that’s 50 miles of cycling every day!

Goggins believes in the importance of stretching every day as a crucial ingredient to recovery and that’s why he does it to the max. He generally stretches for 2-3 hours every morning and has an extensive stretching routine.

Suck It All Up – Run, Cycle, and Swim

As we noted earlier, Goggins has been quoted on numerous occasions saying that he doesn’t like running, cycling, or even swimming. However, he sucks it all up and still does it anyway.

He clocks at least 150 miles from these three activities every week. It’s like he’s always preparing for an ultramarathon or triathlon.

Here’s a low-down of Goggins’ running and cycling routine.

While Goggins hates running, cycling, and swimming, he feels more comfortable lifting weights. During his military days, he was a hulk and had huge muscles from spending many hours lifting weights at the gym.

Today and for the endurance sports such as triathlon, he only lifts weights for 90 minutes after dinner before going to bed at around midnight. He only lifts weights moderately because he doesn’t want his body to bulk up. But even with this, he still makes sure that it’s a grueling workout to help him push his body to the limit.

We must note that Goggins believes that moderation is key as far as weight lifting is concerned. This is why he’s resorted not to lift weights every day. Instead, he does it four times a week and uses the other three days to let his muscles heal and grow.

Focusing on the Core

He swears by a lot of cardio work and has previously mentioned that cardio helped him lower his resting heart rate to 32 beats per minute! Yeah, you read that right.

Needless to say, Goggins has to fuel his strict workout with a perfect diet plan. He’s famously known to follow a ketogenic diet, which he punctuates with a daily dose of intermittent fasting.

His keto diet revolves around eating high amounts of healthy fats and low carbs. While this diet is integral in his intensive workout program, it has numerous health benefits as it helps him lose weight, lower blood sugar and insulin levels, and offer improved mental clarity.

Let’s get into the details.

A Strong Believer in Intermittent Fasting

Goggins believes in the power of fasting and that’s why he doesn’t eat most of the time. Even though he wakes up at 3 in the morning, he doesn’t eat anything until 11 a.m. He’ll then eat oatmeal with protein, blueberries, walnuts, and other fruits.

In most cases, Goggins will skip lunch. Instead, he’ll go for a lunchtime run.

Goggins believes in finishing strong and usually has dinner at around 8:30 p.m.

You should keep in mind that Goggins often changes his meal plan depending on his schedule. If he has to eat the above-mentioned five meals, he’ll spread them across the day based on his workout routine so that he can fuel his body efficiently.

To improve and maintain his mental toughness, Goggins strictly follows what’s known as the 40% rule. This is a concept that he picked during his U.S. Navy SEAL training. According to this rule, you’re only 40% done when your mind is telling you that you’re done and can’t go any further.

Goggins, therefore, uses this concept to keep pushing himself beyond the limit both physically and mentally.

Even though Goggins has tasted alcohol, he doesn’t drink alcohol because he values his mind. He believes that his mind is his greatest asset, so he wants to be clear-headed at all times.

To this end, it’s obvious that Goggins takes things to the extremes. It’s highly likely that you won’t reach his level or even push yourself that far unless you want to become a high-performance athlete like him. However, reaching even half of his fitness plan and workout routine will make you achieve your dream body shape.